Inside North Korea – A trip to Pyongyang

Note: I enjoyed my trip to Pyongyang and I don’t regret it. I am not here to talk about politics nor am I here to discuss anything involved in the news about the country. I hope you can enjoy this photojournal of my rather cold trip to North Korea! Is visiting North Korea unsafe? Absolutely not… If you stick to the rules and don’t disrespect the leader you’ll be completely fine. Some of the unusual don’ts:

January 2018, the trip I was looking forward to for months… It was finally going to happen. As I packed a warm jacket, scarf, gloves and thermal leggings, I was ready for the cold weather in China and North Korea. As a West-European, I rarely have to endure any extreme cold.

8:00 AM, 24th of January. I had an appointment at the rail station of Dandong, a small city and the only city in China which allows overland border crossing between China and North Korea. A Chinese guy from a tour company was waiting for me. I handed him a pack of yuan bills (2000 RMB). In return, he gave my tickets and a bag with food I could consume on the train. He then walked with me through the customs of the train station to the waiting area, a place with duty-free area for alcoholics, cigarettes and perfume. So many people were queuing to buy those goods to bring them in North Korea.

The train was ready to go – I boarded the train and to my surprise, the train was equipped with sleeper coaches with 6 of them per cabin. As the train departed, I had to lay down as I had a bed in the middle, quite annoying. The train crossed the only bridge from China leading to North Korea. I was officially in North Korea and right after, the train stopped and a lot of guards board the train to hand us some custom declaration papers. 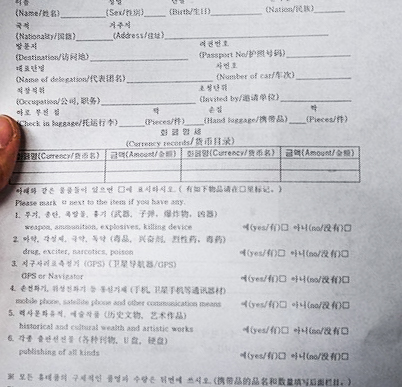 Luckily, I had no killing device with me (see 1. on the photo above). Anyway, after I gave this paper, I was searched thoroughly… My bags, my wallet, pockets, everything. The whole process took about an hour. One of the guards found a Greek-Orthodox icon in my wallet. Something I totally forgot to remove from my wallet… Ugh. I knew that religion is forbidden in North-Korea so I felt the adrenaline rushing through my body. The guard stared in my eyes with disapproval… before he could even say anything I told him “Is it OK? You can throw it away.”. The guard did not understand any English but he just put it back in my wallet. Phew. Another guard was experimenting with the settings of my old DSLR Camera (Canon 40D). He was changing a lot of settings on my camera and he started shouting “GPS GPS?”. I said “No GPS, OLD CAMERA”. It didn’t help, because the guard started looking in the settings for another 10 minutes with my DSLR. I was getting afraid that they confiscate devices that have GPS functions on it. I had a brand-new GoPro with me so I was a bit afraid they would take it. To my surprise, they did not touch my GoPro. I had my laptop with me and they only checked the exterior of the laptop.

The guards disembarked and at exactly 12 o’clock, the train proceeded to Pyongyang. I was waiting for the heater to start on the train, but after 30 minutes, I realised the 5-hour train ride will be without heating. I took the blankets on my sleeper and tried to warm myself up. With a little bit of hypothermia, we entered the city of Pyongyang. It was dark upon arrival. My English tour guide was waiting for me on the platform. We quickly rushed through the busy train station to a minivan and were brought to the hotel. I had to hand over my passport to my tour guide for the days I will stay in North Korea and it will be given back upon departure… It feels strange to hand over your passport. We arrived at the ‘famous’ Yanggakdo International Hotel, one of the few hotels in North Korea, laying on an island in the middle of the river. I was told that leaving the hotel was strictly forbidden and that I always had to be accompanied with my tour guide. The first thing I had to do is go to the restaurant and the food was already ready, they knew exactly when I was going to sit in the restaurant.

My room was quite nice. There was no heating installation, but two electrical heaters were put in my room. I left my room to see what the hotel has to offer. There are a few restaurants, some gift shops and in the basement a pub, massage parlor, a swimming pool, a karaoke bar and even a hairdresser. I was hesitating to try the hairdresser, but I didn’t have the balls to do a North Korean hair cut. I also used the excuse that my hair helped me to keep my ears warm from the cold. It was getting late so I slowly went to sleep in my heated room.

The next two days we strolled around the city centre. The first place we visited was the famous Kim Il Sung square, known for their military parades from the media. The dots on the ground combined with a lot of practising are North Korea’s secret to their perfect looking parades. 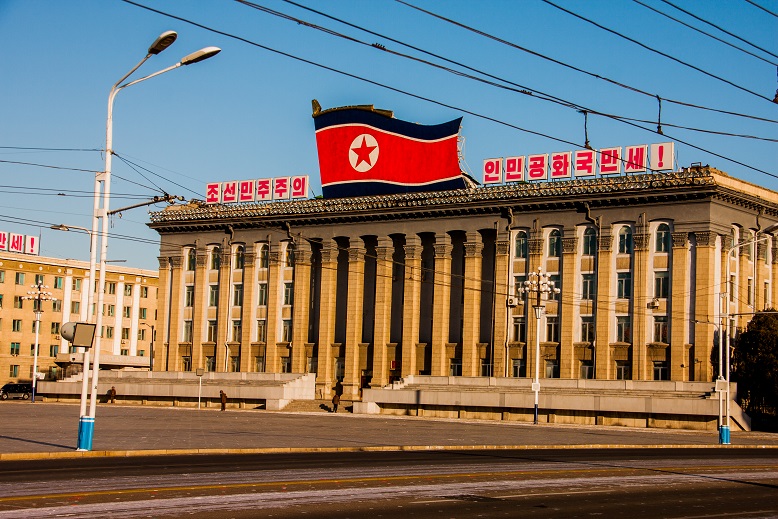 The Juche Tower is situated on the east side of the river, directly opposite the Kim Il Sung Square, referring to the “Juche” ideology of North Korea based on self-containment of their nation.

Just a few minutes away from Juche Tower is the Monument to Party Founding. The hammer, sickle and brush symbolize the workers, farmers and educated/artistic people.

This is me and my guide that had to be in my proximity all the time. She was very kind during my whole journey in North Korea but was very curious about everything outside their country. This made the conversations uncomfortable because I was afraid to say something “wrong”. Although, I was being honest all the time.

One of our other stops was a look-alike of the l’Arc De Triomphe. Turns out it is a few meters bigger than the one in Paris! 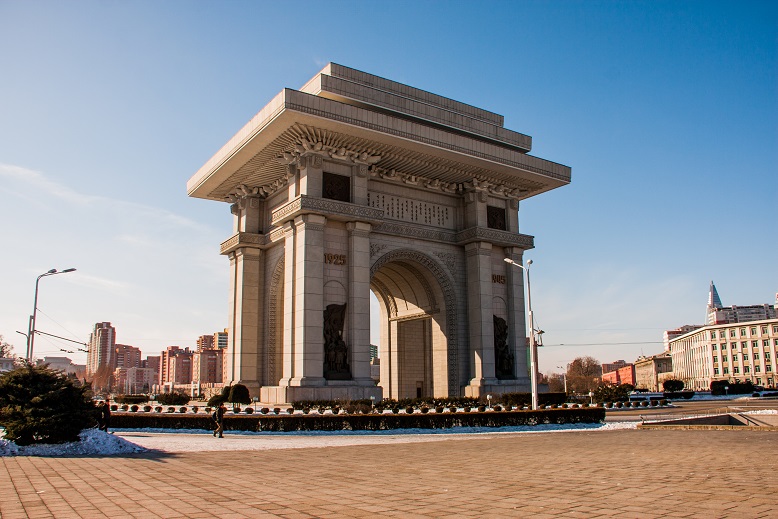 The obligatory stop is at the famous Mansu Hill Grand Monument. We ended up buying flowers to put them at the statue. Afterwards, we bowed for the Great Leader. Strange feeling!

We also visited a secondary school. To my surprise, the class room was heated properly. Even the restaurants had no proper heaters most of the time. I couldn’t figure out why everyone was still wearing their jacket though and everyone seemed to have a different book or no book at all. Two awesome Taiwanese ladies with me on tour were posing in the class with the pupils.

I was interested in a North Korean newspaper and also a few postcards to send to a few friends, so we ended up in a book store. I couldn’t get enough of the propaganda postcards so I bought a large amount of them. I also bought a translated newspaper! 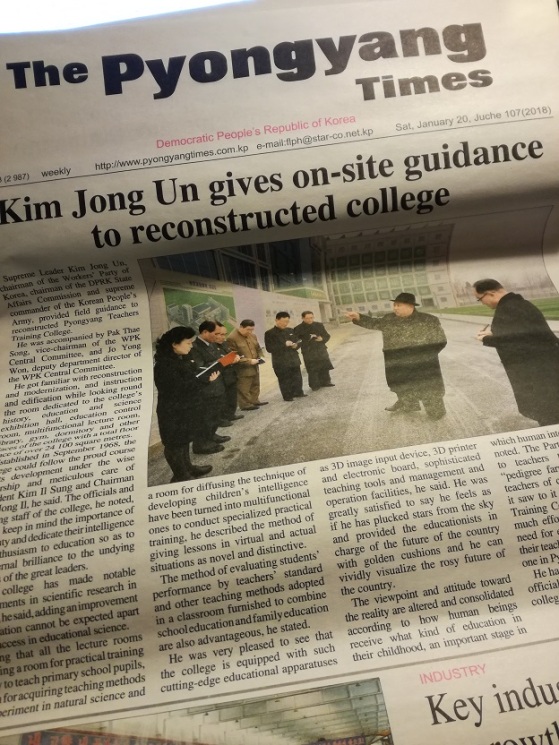 North Koreans are proud of their accomplishments. One of the places we visited during our tour was the West Sea Barrage, a dam built in the ’80s to prevent intrusion by sea water into fresh water, solving the water scarcity in North Korea. After an hour drive, we arrived at the dam. As you can see, the extreme weather had frozen the surface of the sea and river! We watched a video about the construction of the dam and most of it was made by hand with minimum use of excavating equipment.

two days passed and the day before visiting the DMZ between North and South Korea, I ended up in the karaoke bar in the basement of the hotel, listening to Chinese songs. It felt weird to be in such a big hotel with only 3 guests around! I guess Trump’s ban for Americans and the ban by China did affect tourism to the country. Maybe wintertime isn’t a great moment either!

My last full day in North Korea was going to be unique. I was going to visit the DMZ. In the video (at the end of this blogpost) I have some shots of the rooms where North and South negotiated. A guard was asking me to get on the picture with me! Apart from that, they were very strict about photography in this area. I will show you my 3 favourite shots.

One of the North Korean officers who liked being photographed 🙂 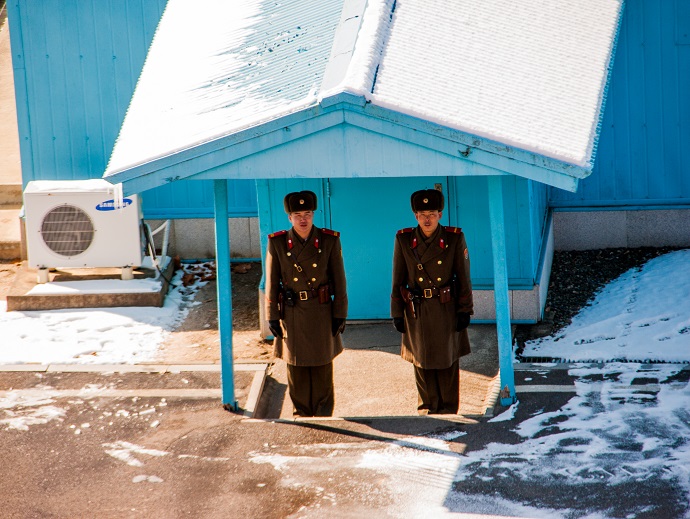 Two soldiers on the North Korean side… Much respect for them in this extreme weather!

We returned back to our hotel right before sunset. So how should I end my last evening in North Korea? I decided to get to the revolving restaurant on top of the hotel. As I don’t really enjoy drinking alcoholic drinks, I chose a nice healthy ginseng tea North Korean style. Ginseng is North Koreans traditional medicine for almost any disease and is even sold in injections…!

View from the revolving restaurant of the Yanggakdo hotel

Do you wonder about my experience with Korean food? Well honestly, most of the time I really enjoyed the food. They always served way too much and yes, I felt really sorry for all the wasted left-overs… Here’s a short photo summary. Dumpling soup and the BBQ-ish meal was amazing, the rest was OK (except for the fish, I didn’t touch it). I’m happy they didn’t serve me dog meat at least… as far as I know of!

In the morning I had to fly back to Beijing with the infamous Air Koryo. I’ve reviewed this in another blog post, click below on the picture to read!

The last thing I can show you is a short video I made with my GoPro!