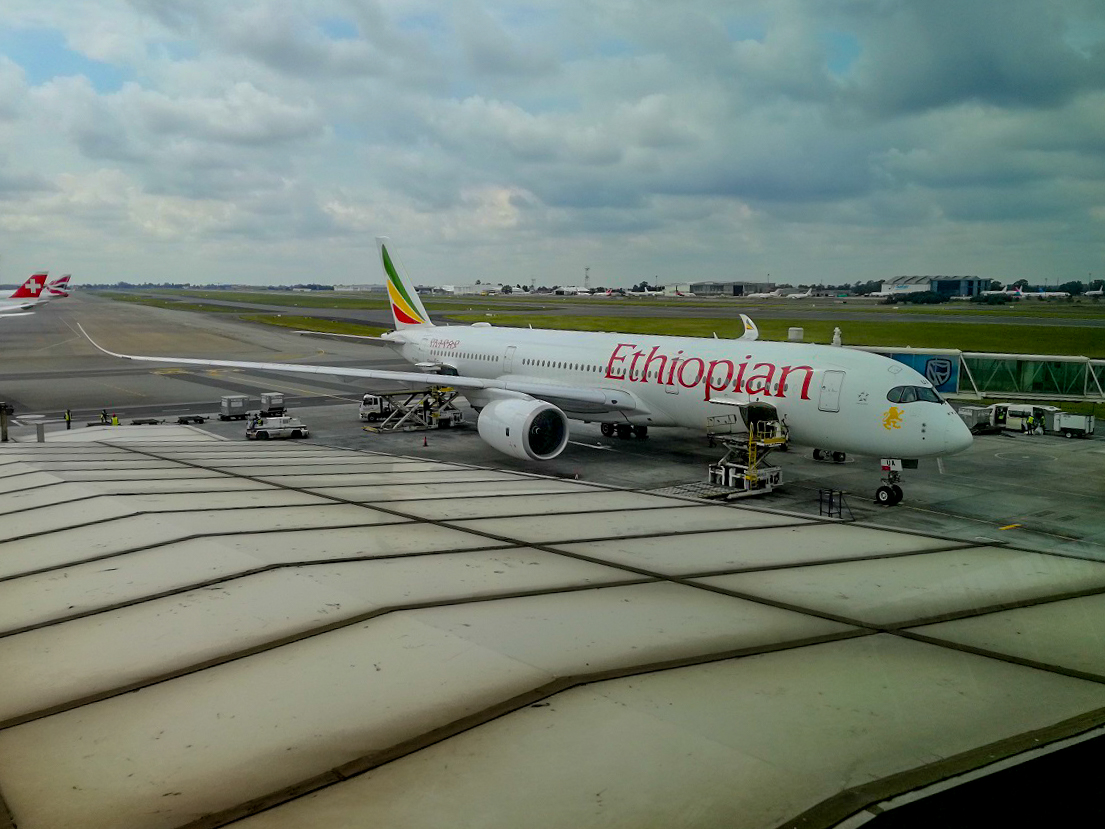 I booked a very cheap economy ticket from Brussels to Johannesburg with Ethiopian Airlines. This would’ve been a hell of flight in “cattle” class, but thanks to PlusGrade, a system where you can offer to upgrade to business class, I was able to fly business class from BRU-VIE-ADD and ADD-VIE-BRU with the lowest offer. 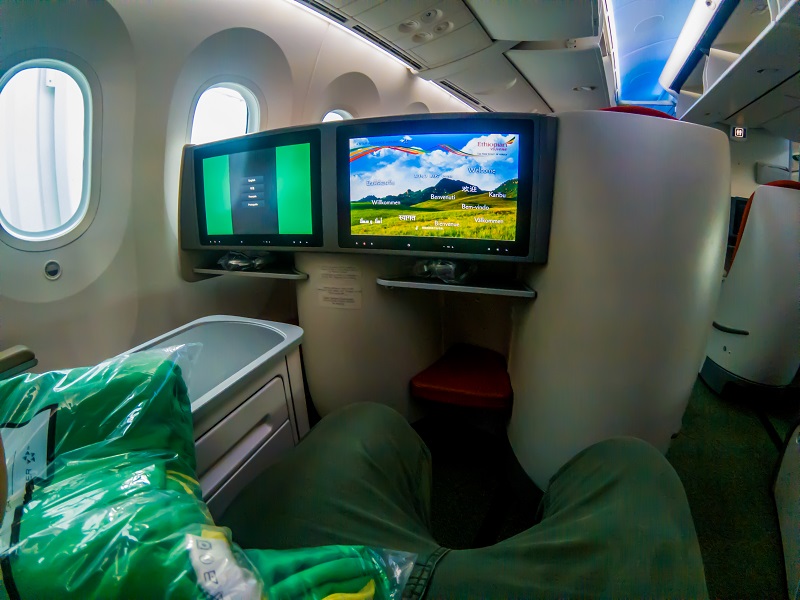 There are a lot of mixed reviews of Ethiopian Airlines on the internet. I was very curious to experience their Cloud Nine product myself. I already flew economy class with Ethiopian so I knew what to expect and I was prepared for the crappy airport in Addis Ababa.

My journey started at Brussels Airport. The evening flight departed from the B gates and I had access to “The Suite lounge by Brussels Airlines”. In comparison with The Loft Lounge at the A gates, this was a very relaxing experience. There were not many people around. 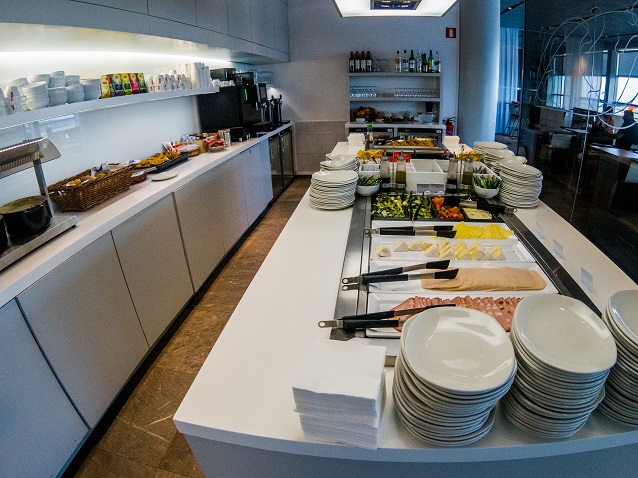 It was time to board and to my surprise, business class was nearly empty. I was offered a welcome drink and shortly after departure, a hot towel.

I was checking their in-flight entertainment and chose a movie I was going to watch after take-off. To my surprise, there was no sound. I called the flight attendant and she tried to fix it but failed to do so. She offered me to switch seats after the passengers board in Vienna. During the flight to Vienna, I received these toasts.

We arrived in Vienna and after the passengers boarded, I chose to sit in front, where the sound of my IFE system worked fine. I was lucky business class was not full…

I chose the dinner option with ravioli and was pretty disappointed with their plain meal. Traditional Ethiopian food was only offered on their return flight so I already knew what to order on my return trip :). 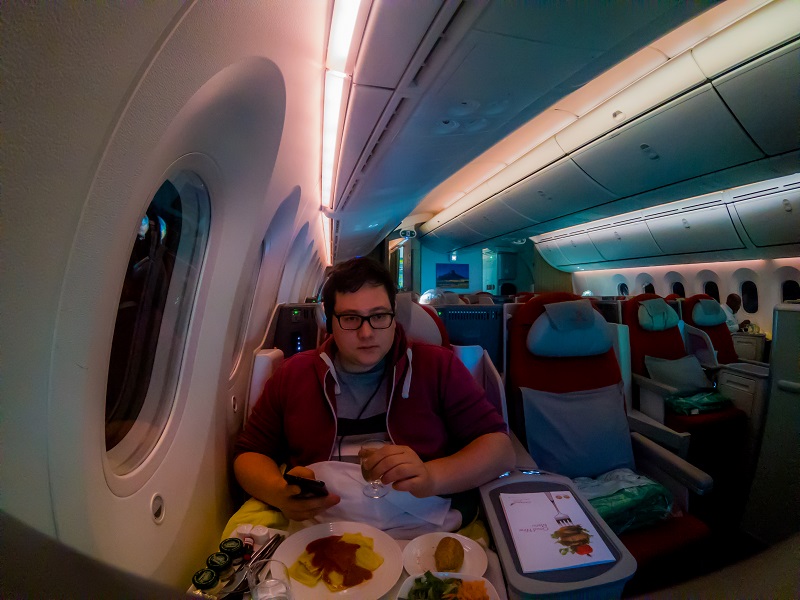 Here’s a quick overview of the basic amenity kit Ethiopian has to offer, including Ethiopian water. They offer green, yellow and red kits.

A few days later, I had my flight back to Brussels. The airport of Addis Ababa is not the most exciting airport on earth. I arrived in the evening and I went to the business lounge. Apparently, Ethiopian Airlines has two different lounges: for Star Alliance Gold members and passengers in business class on other Star Alliance airlines. There is a Cloud Nine Lounge available, not an impressive lounge, but the Ethiopian coffee corner was pretty nice! 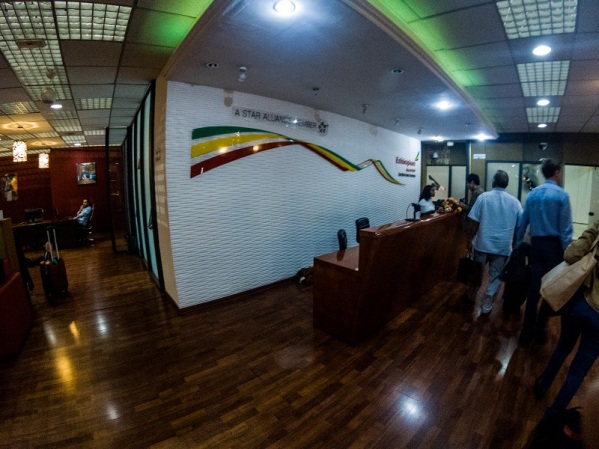 After a few hours, it was time to board. Every now and then, a lady started screaming departures at the Cloud Nine Lounge, so you knew it was time to go to your gate. Priority boarding lane is always equipped with a red carpet. 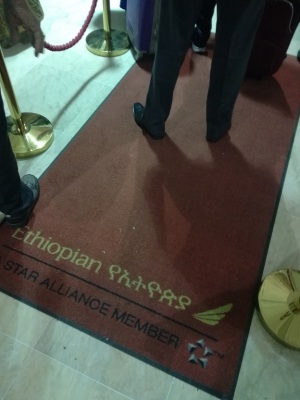 In comparison with my ongoing trip, business class was completely full. The first thing I tried was the IFE to check if the sound works. Luckily for me it worked. But I heard other passengers complain about the same no-sound issue as my inbound flight. I’m not sure if they managed to fix it or if people get any compensation in return… 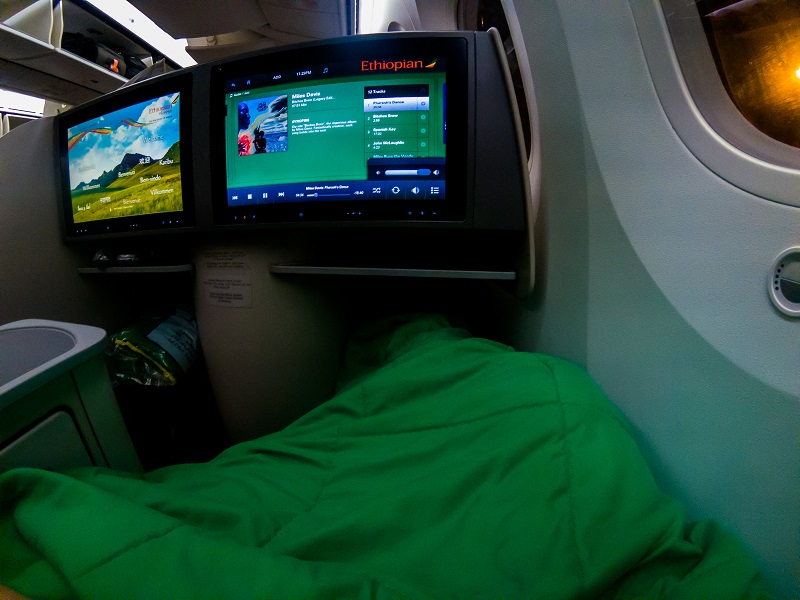 The food was much better on the flight to Brussels (via Vienna).

Main course was a mixture of different Ethiopian dishes, very nice (but might not look as good as it is!)

Then it was time to rest. I do not have any complaints about the seats. Next to me, you can see how it looks full flat. I was sitting in “lounge mode”.

After wake up, I received even more food. Breakfast at 4:30 AM. Couldn’t eat a lot.

2 hours later we headed from Vienna to Brussels and received a snack with potatoes, meatballs and samosas, which was quite good! 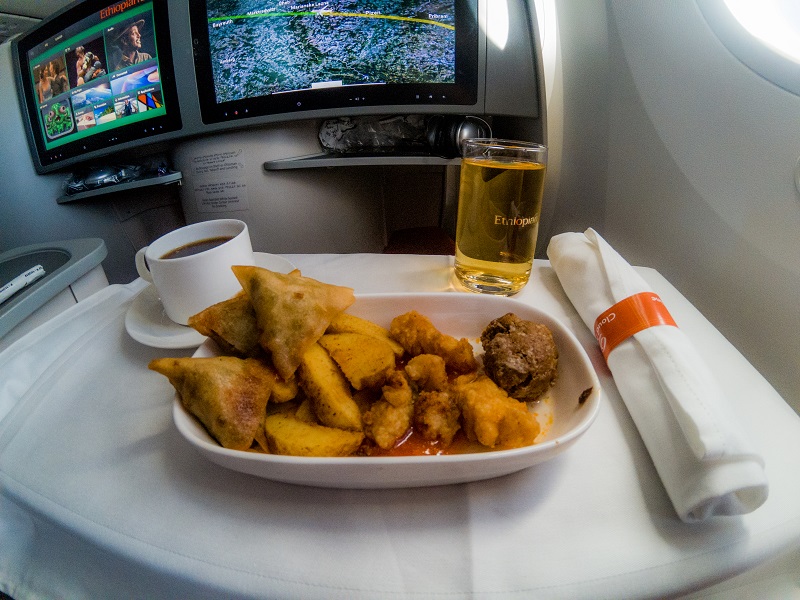 Compared to other airlines, they lack some important things. Most Flight attendants are very friendly. If you have questions or need help with anything, the FAs will surely help you with a smile. The IFE issue was a red flag. During my flight to ADD they were acting surprised and tried to fix it, but had to change seats with a working IFE. Someone else had the same issue during the flight to Brussels and the FAs acted surprised too. This is apparently a common issue with Ethiopian Airlines.

A few other minor things… When serving the canape, they forgot to cover the table, they also forgot to offer me the menu, while the passenger next to me received one so I had to ask for one. The menu offers 3 different breakfasts and I had to give my personal choice, but I was served something else.

The most painful moment during the flight… The toilet was locked while nobody was using it and the seat belt sign was off so I asked politely to one of the FAs if he could unlock the toilet for me. The FA told me I had to use the bathroom at economy because this one is for business passengers. The FA was serving on the left side the whole flight and thought I was an economy passenger. Another FA interrupted and unlocked the door for me, but the rude FA did not excuse himself. I guess I don’t look like the typical business passenger (: